Map of the Viking World 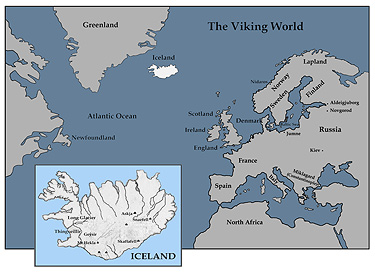 Viking Age Iceland and the Sagas

From this unforgiving land of glaciers and volcanoes sprang the first people of barbarian Europe to create a major literature in their native language. Fleeing persecution by the kings of Norway, the farmers of Iceland, living without towns or even villages on land that barely yielded a livelihood, governed themselves through a parliament, the Althing, in which every landowner, however small, had his say. We know about their lives thanks to the dozens of surviving sagas. Though the sagas date in written form from two or three centuries after the Viking Age, they nevertheless capture the stoicism, the grim humor, the intricate family alliances, and, above all, the deadly feuds that occupied the lives of these tough farmers and seafarers. The Saga of Burnt Njal and the Saga of Egil Skalagrimsson have inspired scenes in Odin's Child. There are numerous English translations, of which those in the Penguin Classics series are very readable and easily available.

In addition to the family sagas, I have drawn on the quasi-historical sagas of Saint Olaf, who imposed Christianity on Norway by fire and sword, and his younger half-brother, Harald the Ruthless, whom we will meet again in the later novels. Unlike the family sagas, which are anonymous, these Sagas of the Kings of Norway were composed by Snorri Sturluson—poet, scholar and ruthless politician (and, by the way, a descendent of the Snorri-godi who persecutes Odd's family in the novel). These, too, are available in English translation both in print and online.

Readers who want to go deeper into the history and culture of the period cannot do better than Jesse Byock's Viking Age Iceland (Penguin Books, 2001).


A Note on the illustrations

In this and following volumes the author and illustrator, Anthony Macbain, hope to revive the 19th century tradition of illustrated adventure novels for adults. 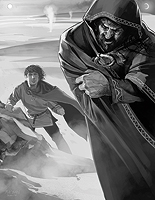 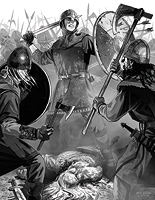 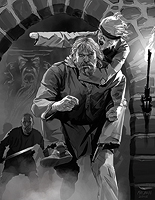 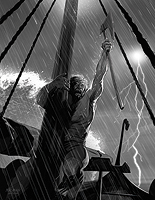