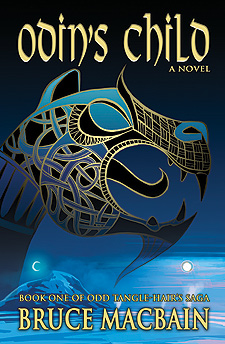 Book One of Odd Tangle-Hair's Saga

Driven from the flaming ruin of his Iceland farmhouse, young Odd Tangle-Hair, the only survivor of his slaughtered family, steals a ship, rounds up a rag-tag crew, and embarks on the Viking life. He swears one day to return, rich and powerful enough to take vengeance on his enemies. But how far off that day seems!

He is the son of Black Thorvald, who had once been a chieftain in Iceland. But in the year 1000, when the country adopted Christianity, Thorvald denounced the new faith and shut himself up in his hall, shunning the world and shunned by it. Odd fears that the worm of cowardice that unmanned his father has infected him too. He has inherited from Thorvald a shock of black hair, a gift for poetry, and an allegiance to Odin, god of battles and magic. But Odd is heir to darker traits as well—a hint of madness and a wild temper which will sometimes cost him dearly.

Fate carries him and his men to a shamanistic healer in Lapland, to bloody religious strife in Norway, to the lair of a witch in Finland, and finally to the borders of Russia. Here Odd will leave his comrades behind to join the retinue of a Norwegian princeling who is fleeing to the court of Yaroslav, Grand Prince of Rus. New dangers wait for Odd in that faraway country.

Odin's Child is available in paperback.

Watch Bruce's Behind the Pages interview

"[Macbain's] writing is vivid and compelling, and his understanding of Norse and Icelandic culture and history is woven deftly throughout the tale. The cast of characters is well-fleshed out and Odd makes for a wonderful protagonist. I thoroughly enjoyed this novel, and I eagerly await its sequel. Highly recommended."
—Historical Novels Review for May, 2015, Editor's Choice

"Written with passion, peopled with superbly realized characters, I was gripped from the very first page of this historical novel."
—Carol McGrath, Author of The Handfasted Wife and The Swan-Daughter