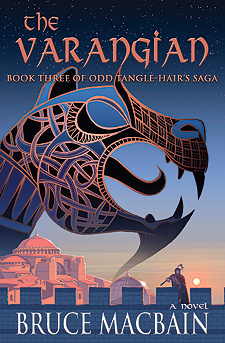 The third volume of Odd Tangle-Hair's Saga finds our hero in Golden Miklagard (Constantinople), posing as an ambassador from the Grand Prince of Rus. But his real mission is to assassinate his former master, Harald the Ruthless, who has now risen high in the Emperor's Varangian Guard. Odd is dazzled by the brilliance of the Byzantine capital and its beating heart--the Great Palace, with the astonishing Throne of Solomon that levitates above the heads of kneeling courtiers.

Here, Odd will meet Constantine Psellus, an ambitious young bureaucrat who mentors him in the ways of the court. He will be drawn into an intrigue that involves the Empress Zoe, who spends her days brewing vats of perfume, and John the Guardian of Orphans, the powerful and sinister eunuch who schemes to advance his family. And Odd will fall in love with Selene, an alchemist's daughter, who supports herself by gambling in the waterfront taverns.

Finally, after a hard-fought campaign against the Saracens in Sicily and the overthrow of an Emperor, Odd reaches the pinnacle of power and believes he has vanquished his enemy Harald once and for all.

Then disaster overwhelms him.

"Thoroughly effective at explaining the intriguing and highly complex circumstances of the time period, Macbain's book shines in a way that only historical fiction can. Who needs King Jon Snow in Game of Thrones when one can get a glimpse of the historically real and undeniably sinister John the Guardian of Orphans? Even the most terrifying dragon pales in comparison to the sheer horror of a society so comfortable with castration. As the story ventures outside of Constantinople, the reader is treated to a plot that can only be described as epic."
—Kirkus Reviews

"This is the third and final of Macbain's Odd Tangle-Hair novels. All three have been spellbinding in their storytelling, though this one may be the best. Odd's journey takes us around the Mediterranean and eastern European world, and all the way north back to Iceland. The characters are wonderful, the story intriguing, the combat real but never superfluous, and Odd makes for the perfect protagonist. Highly recommended."
—Historical Novels Review (November 2016)