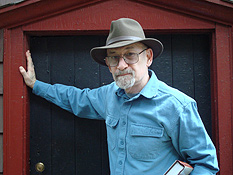 From boyhood, Bruce Macbain spent his days in reading history and historical fiction. The Greeks and Romans have held a special fascination for him and this led to earning a master's degree in Classical Studies and a doctorate in Ancient History. Along the way, he also taught English as a Peace Corps Volunteer in Borneo. Later, he taught courses in Greek and Roman civilization at Vanderbilt University and Boston University, and published a few dense scholarly monographs, read by very few. Recently, he has turned to writing fiction, a much more congenial pursuit. He has published two historical mysteries set in ancient Rome, Roman Games and its sequel, The Bull Slayer. Now, he has turned his attention to his other favorite folk, the Vikings. Odin's Child is the first novel of a trilogy, Odd Tangle-Hair's Saga, which follows our hero—a wanderer, poet and warrior—from his tiny Iceland farm to the Great Palace in Constantinople.

You have an academic background. Yes, I have degrees in Classics and Ancient History from the University of Pennsylvania and I taught those subjects at Vanderbilt and at Boston University.

So you've written both scholarly prose and fiction; which is harder? Fiction without a doubt. Academic writing is allowed to be dull. With a historical novel you do all the same research and then have to turn it into an interesting story. Also, your audience is much wider. You need to give them the background information they need to enjoy the story in its historical context.

When you write fiction is your "inner academic" ever at war with your "inner novelist"? Always. It's always a tug of war between adhering strictly to the known facts and shaping a dramatically satisfying plot. I think every historical novelist fights this battle and we all fall somewhere on a spectrum between factual and fanciful. Certainly, in my books, I've introduced some story elements which I can't justify from the sources. But I always try to describe events that could have happened and create characters who authentically reflect their time.

Then what do you think is the historical novelist's responsibility to the reader? To confess his sins. I read historical novels both to be entertained and hopefully to learn something about a period or a character that I may know little about. I appreciate it when the author appends a note at the end telling me exactly what is true and what is invention. I don't think that detracts from one's enjoyment of the novel.

What about your tastes in reading. Have you always been a mystery lover? As a kid, I was much more into science fiction. I cut my teeth on Edgar Rice Burroughs' A Princess of Mars and its many sequels. If nothing else, they enlarged my vocabulary. Greensward, escarpment—wonderful words, although I seldom find an opportunity to use them. As a teenager I began to read historical novels too—Scaramouche, Prince of Foxes, Captain from Castile (I know I'm dating myself here). I only came to mysteries later but these days they are a large part of what I read. And every time I read a good one I learn something new about the craft.